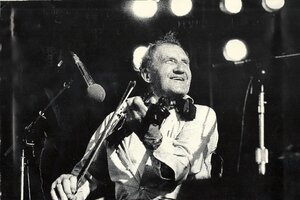 Rufus Guinchard was born on September 6, 1899, in the community of Daniel's Harbour on the Northern Peninsula of Newfoundland where he spent his first 47 years, moving from there to Port Saunders and later to Hawkes Bay where he remained until his passing at the age of 91. The oldest boy in a family of 8 children, he was fishing with his father, Joseph, by the age of 8 and by age 14 was trapping, logging and learning the various other skills required to live at that time. At age 22 he was married, later widowed with 8 children. He remarried in 1949 and had an additional 3 children.

Rufus learned to play fiddle at the age of 11 by watching and listening to other fiddlers in the area, most notably his Uncle John Peter Payne. Determined to teach himself how to play, when nobody was home he would take down the old fiddle from its place on the wall behind the stove and practice. Not wanting anyone to catch him learning, afraid they would laugh at his initial attempts, he'd sit on the kitchen table by the window with his feet on a chair so he had a clear view of anyone approaching the house. Looking out the window to his left necessitated holding the fiddle on his right shoulder so the bow wouldn't strike the window. Being only 11 years old, he shortened the bow to a more comfortable length by holding it halfway up the stick. Thus developed the unique style that remained unchanged over the next 80 years of fiddle playing.

As an adult, when not occupied as a fisherman, logger, trapper, carpenter or river warden, Rufus was busy playing the fiddle for dances along the coast from Sally's Cove to Flower's Cove. He learned and retained many of the old tunes played in these communities and continued to play them through the 1950's and 60's, a time when local folk music was less popular than it is today.

During a revival of interest in folk music in the mid 1970's, Rufus was "discovered" by folklorists and invited to perform at Memorial University and The Arts & Culture Centre in St. John's, thus launching his new career as a "professional musician" at the age of 75. With musicians like The Breakwater Boys, and Jim Payne & Kelly Russell, he began travelling the world, bringing his unique style of fiddling to delighted audiences in Japan, Australia, France, England, Ireland, USA and all across Canada. He appeared on countless radio and TV shows and received numerous awards including the Newfoundland & Labrador Arts Council Award for Music and, most notably, the very prestigious Order of Canada .

Rufus recorded 3 albums during this time. His first, called Rufus Guinchard - Newfoundland Fiddler , was a solo LP released by Breakwater Books Ltd . in 1978. Step Tunes & Doubles was recorded in 1981 with accompaniment overdubbed by Jim Payne on guitar and myself on second fiddle & bouzouki, released on LP on the Pigeon Inlet Productions label. Humouring the Tunes was produced by Jim Payne, who also provided guitar accompaniment and sang on the album, released by Sing Song Productions in 1990. In 1987, some of the Step Tunes & Doubles recordings were released on cassette tape along with tracks from the LP Jim Payne & Kelly Russell , under the title Newfoundland Songs & Fiddle Music . In 1996, I re-issued the then defunct Step Tunes and Doubles recordings, providing new accompaniment and releasing on CD & Cassette under the title Fathers of the Newfoundland Fiddle - Volume 1. In addition to these recordings, there has also been a video made about Rufus which is available in some stores.

When Rufus passed away on Sept 7th, 1990, he left with us a great legacy of unique and indigenous Newfoundland music which would not have survived had it not been preserved in his memory to be passed along to the next generation.

The 102 tunes published in this collection represent everything Rufus Guinchard played for me during the years from 1976, when I first met him and began to record and learn his tunes, until he passed away in 1990. In fact, before meeting Rufus I already knew several of his tunes including his own composition Centennial Highway Reel which I had learned from a tape on loan from the Memorial University Folklore Archive . It was in 1976, in front of the Thompson Student Centre, when both Figgy Duff and The Breakwater Boys, my group and his respectively , were performing for the Canada Summer Games Opening Ceremony that I walked up to him, introduced myself, opened my fiddle case and played his tune. Needless to say, it was the dramatic beginning of a lasting friendship.

Although Rufus did compose several tunes, the greater portion of his repertoire is traditional, mostly tunes learned from his old uncles and other players from the local area. According to Rufus there were more tunes that he used to play, and heard others play, but he couldn't recall them all. During the many times that he stayed with me in St. John's, or that I stayed with him in Hawkes Bay, or that we were on the road together, perhaps sitting around in a hotel room or a pub, Rufus would recall yet another old tune and I would learn it on the spot and later jot it down on manuscript paper or record it on tape. In 1982, I wrote a small book called Rufus Guinchard - The Man and his Music , published by Harry Cuff Publications and now out of print, which contained notation to 60 of his fiddle tunes plus a detailed biography and photos. The additional 42 tunes printed in this collection are, for the most part, tunes that he recalled since that publication.

Rufus Guinchard's repertoire consists of some very unique tunes that are not commonly found elsewhere. There are, of course, some standards such as Flowers of Edinburgh and Devil's Dream but many of the tunes are not common to the repertoire of Irish, Scottish or Cape Breton fiddlers. Given the close proximity of the Northern Peninsula of Newfoundland to Quebec and the fact that fisherman and sailors from Quebec often visited Newfoundland's northwest coast, I began to think that some of this music may have migrated. One need only consider the origin of many place names on that coast to find evidence of French history. In fact, once while visiting the Museum of Civilization in Quebec City, I heard a recording from the early 1900s of a then popular Quebec singer, Madame Bolduc, and the melody she was singing was a tune Rufus always played called Sam Sinnicks' Tune . Other tunes in his repertoire have, to my ear, that same French flavour such as Pretty Little Mary, McBen and Four Turn Tune . Given that Rufus' ancestry is part French, as his Grandfather Guinchard sailed to Newfoundland from St. Malo, France, it is quite possible that a portion of this music reflects French roots.

Irish roots are evident in some of the repertoire, however, with the presence of tunes such as Maid Behind the Bar and The Girls of Banbridge . Similarly, there is evidence of West Country England in Rufus' music. Tunes such as We are a Set of Jolly Lads, Double Sledder Lad and See How the Farmer Sows his Seed are very rooted in English folk tradition. English surnames like Ploughman, Biggin, Endicott abound on the Northern Peninsula and Rufus had traced his ancestry back on his mothers side to Somerset in England. While on tour in England in 1983, it became obvious that Rufus' accent, as well as many of his linguistic turns of phrase, were very West Country English. Similarly, when in Ireland on the same tour, John Kelly, an older fiddler from County Clare, noted that Rufus played the tunes in the old style, more fast paced for the dancing rather than the modern trend toward more ornamental playing for the listening audience. Many of his jigs (Rufus called them doubles) are played very fast, more akin to Kerry slides. His reels (called step tunes) were also played very fast as, according to Rufus, that's how they liked it for dancing.

I have in the past made attempts to describe Rufus' style of playing and his manner of ornamentation in text form but have found it cumbersome and not entirely satisfactory. Similarly, indication of particular ornaments in the music transcripts can be equally cumbersome. In my notations I have chosen to provide a basic map of melody, uncluttered by any ornamentation or other symbols. I highly recommend that anyone requiring further insight into just how Rufus played these tunes should listen to the available recordings and, although you won't hear all the tunes printed in this book, you will hear enough to give a very definite sense of the more technical aspects of his playing style. One frequently used ornamental technique I will mention here is that of lifting the finger off and back on the note very quickly. Example : for a "B" note on the "A String" : play the "B" then quickly lift the finger off the string and back on again, producing a very rapidly executed "BAB" sequence. For a "D" on the "A String", use the "C" or even the "B" below it and back to "D". Also note that Rufus never employed what Emile Benoit would call "the squibble", a triplet on the same note (i.e. DDD) executed with a quick flick of the bow.

Regarding the names of the tunes, in many cases these are Rufus' own creation as many came to him without associated names. He would often name a tune for the person he learned it from i.e. Suzanna Perry's Tune, Uncle John Peter Payne's Tune, Leonard Payne's Tune . Some were named for people who liked a particular tune or would often request it at a dance i.e. Annie Annie, Arthur Perry's Jig, Doreen . Sometimes an event would result in a title i.e. Uncle Harry's Out of Shape, Old Boney, Uncle Manuel Milks the Cow . Other tunes came with names already attached i.e. Boston Laddie, Bees & Flowers, Cook in the Galley . Then there are other cases where even Rufus hadn't named the tune, particularly if it was one that he had recalled for me but didn't play often. Research uncovered the title of one such tune, The Girls of Banbridge which title I have used but placed (in parentheses) to indicate that Rufus did not use it. Other untitled tunes that couldn't be found elsewhere I have simply named Jig #1, Jig #2 or Reel #1, etc. in arbitrary order.

The fiddle music played by Rufus Guinchard has a distinct Newfoundland flavour and often, when played for the uninitiated at tune sessions, etc. is a little off the beaten path, especially for inattentive guitarists. These tunes seem to chart their own course and offer a challenge to the tune player to try something a little different. The results of such an effort are sure to be rewarding.